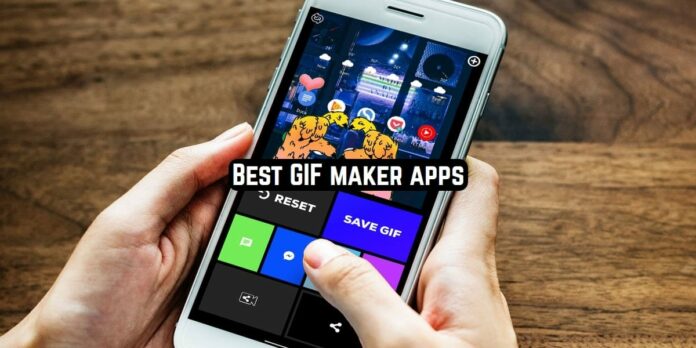 GIFs, which are arguably the most entertaining aspect of online communication, are a sequence of static images that, when strung together in the manner shown in the examples above, produce a distinctive effect.

They infuse life into social media posts, vigor into text and email exchanges, and overall make the internet (and this post) a more enjoyable place to be. Many people enjoy creating their own animated GIFs by GIF maker tools to post on their websites, on social media, or on other digital platforms, and they are not alone.

If you are one of them, you have arrived at the correct place. We’ve compiled a list of the finest GIF maker apps or GIF creator available – organized by iPhone and Android compatibility – and assessed them so that you don’t have to waste your time researching them yourself.

What is a GIF Maker App?

Applications that allow users to collect or upload movies or photos in order to create GIFs from scratch are known as GIF maker applications. Most of these programs allow users to further customize their designs by including additional effects such as emojis, photos, text, filters, and backdrops. 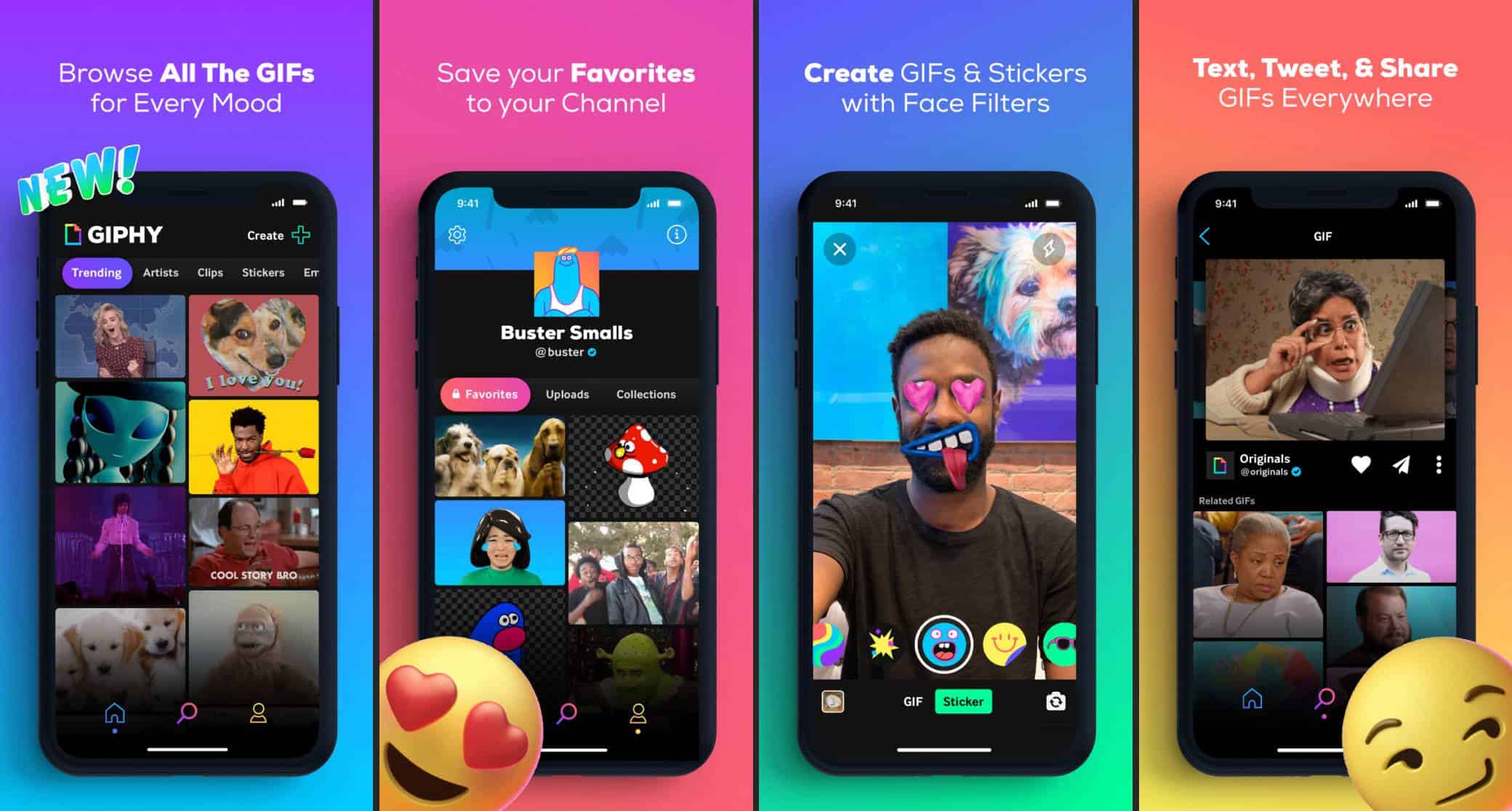 They also include the option to export files, and some of them are directly integrated with social media outlets to allow for smooth sharing of photos and videos. The characteristics of each tool on this list differ, so be sure to read the full text before choosing the best software for your personal or professional needs.

Let’s get started without further ado. Below you’ll find a list of the top 10 apps available for both iPhone and Android, as well as our personal favorites on each platform.

Pixel Animator: GIF Maker takes a fresh approach to GIF creation by concentrating on the creation of pixel-based gifs. You may use this program to create pixel art and then convert it into a GIF for a distinctive, retro video game-style effect.

Pixel Animator: GIF Maker allows you to create sprites and avatars pixel by pixel, or you can piece creatures together using pre-made elements from their library. Then convert your design into a moving GIF and share it on social media, or save it on your phone’s camera roll.

The software is simple to use and adds a playful touch to GIFs by using this vintage art form. For iPhone and Android users, it’s available for free, with the opportunity to purchase additional in-app features such as filters and effects.

Gif Me! Camera is a simple-to-use GIF generating tool that was designed with ease of use in mind. This program was created with a basic and intuitive UI, which enables creating GIFs quickly and simply for anyone. Our app is remarkably similar to the other apps on this list in a number of respects.

Before sharing your GIFs on social media, you can customize them with filters, special effects, and other entertaining components. The most striking aspect of the Gif Me! Camera is the sheer number of features it has to choose from.

There are several options available for creating GIFs, such as starting from scratch or editing existing GIFs. You may even convert videos into GIFs and even photos into GIFs. In spite of the fact that a small number of users have reported unstable experiences, primarily unexpected crashes during the exporting process, this program has been carefully engineered and constructed.

Gif Me! Camera is a $1.99 app accessible on both Android and iPhone devices.

The GIF Toaster is a free GIF maker tool that allows you to convert nearly anything into a GIF. Videos, photographs, bursts, time lapses, panoramas, and anything else you can think of may be turned into a GIF using this program.

Although their editing features are quite typical, GIF Toaster also includes a photo collage creation feature, which helps to distinguish the software from the competition. The GIF Toaster is available on both iPhone and Android devices. Both versions are free, with the opportunity to purchase a Pro package for $1.99 in order to have access to additional features.

Android users, on the other hand, should exercise caution. Many Android users have reported technical problems with the quality, functionality, and convenience of use of their devices.

Tumblr is undoubtedly recognizable to you if you’ve heard of animated GIFs. Tumblr is a micro-blogging and social networking site that first gained popularity in 2007 and is still going strong today. The app includes a built-in GIF maker, which allows users to create and customize their own GIFs.

Even though Tumblr is not as robust as some of the other apps on our list that were expressly built for GIF creation, it allows you to create them, add stickers, overlay text, and do a variety of other things. This feature is available for free on Tumblr’s mobile app, which is available for both iPhone and Android devices.

The tagline of GIF Studio is “More than a GIF Player,” and they are absolutely correct. You can perform all of the fundamentals, such as controlling timing, applying filters, and cropping and editing GIFs. GIF Studio, on the other hand, has certain distinguishing characteristics.

Users can combine many GIFs into a single animation, reduce file sizes while maintaining quality, and create a collage, giving this medium a whole new dimension to explore and experiment with. The app’s user-friendly interface was created to make editing simple while concealing the technical nuances occurring in the background — and it succeeds in this goal.

GIF Studio is a free app available on the Google Play store for Android devices. Users can upgrade to an ad-free version of the program for $0.99 if they do not want to see advertisements in the free version.

GIPHY Cam is a mobile application produced by GIPHY, one of the most well-known names in the GIF industry. As you might expect, this industry leader packs a powerful punch with their mobile application. GIPHY Cam allows you to record video with your phone and then edit it with special effects, text, and filters before sharing it on social media or sending it as a text message to friends.

The GIPHY Cam, on the other hand, isn’t simply for making GIFs from scratch. Also available is the ability to import your own videos and use their tools to include entertaining aspects into current footage. The only drawback we can discover with this program is its dependability; some users have reported system failures when attempting to save GIFs to their phones, which we believe to be a bug.

GIPHY Cam is a free app that can be downloaded on both iPhone and Android devices.

Video to GIF is an application that can only be used on the iPhone. Its most distinctive feature is the ability to upload a video directly from YouTube, allowing users to convert video information into a GIF format. Although simple to use, the functionality of this software is fairly limited.

User comments on text overlays have been overwhelmingly negative, with users expressing annoyance at the lack of color and layout options available in the application. While Video to GIF includes additional functions that may be purchased within the app, the core features are sufficient and do not necessitate the use of a watermark.

We recommend this software to anyone who want to take advantage of its seamless integration with YouTube, which is unique among similar apps.

GIF Camera is a program that allows you to generate animated GIFs from films you have collected. This is a straightforward program with few bells and whistles, but users who want to convert photographs or movies into simple GIFs will appreciate how straightforward it is to use.

For those seeking for an app that allows you to apply artistic stickers and filters to your photos, you’d be better off looking at another choice on our list instead of this one. GIF Camera is available for free on the Google Play store, however it includes in-app advertisements.

There is currently no way to upgrade to a platform that is free of advertisements.

With the GIF Maker-GIF Editor, you can easily cut, trim, and edit your images, as well as speed them up or slow them down. It includes all of the functionality you would expect, and while it does a good job with the essentials, it lacks any standout features that would distinguish it from the other apps on this list.

Additionally, many customers are reporting issues with the most recent version, so be sure to have a backup strategy in place if you decide to explore with this application. GIF Maker-GIF Editor is a free app that can be downloaded from Google Play.

The free version of the program includes in-app adverts, and users can upgrade to the ad-free version for $2.99.

With the GIF Maker-GIF Editor, you can easily cut, trim, and edit your images, as well as speed them up or slow them down. It includes all of the functionality you would expect, and while it does a good job with the essentials, it lacks any standout features that would distinguish it from the other apps on this list.

Additionally, many customers are reporting issues with the most recent version, so be sure to have a backup strategy in place if you decide to explore this application. GIF Maker-GIF Editor is a free app that can be downloaded from Google Play.

The free version of the program includes in-app adverts, and users can upgrade to the ad-free version for $2.99.

Having fantasies of producing and sharing mind-blowing animated GIFs has you spinning with ideas? If this is the case, keep in mind that you do not have to make them from scratch. If you already have videos that you wish to convert to GIFs, you can do so with a simple GIF maker or converter.

We recommend that you read our post on the Top 10 Video to GIF Converters, in which we review the most popular Having fantasies of producing and sharing mind-blowing animated GIFs has you spinning with ideas?
Facebook
Twitter
Pinterest
WhatsApp